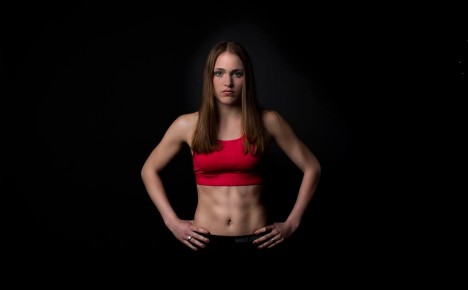 Before Elke gets on a plane to Switzerland, we have a little chat with her trainer Roderik Bratianu.

Is this the first time for Elke at this tournament?

She has represented her country a number of times already at team competitions like the European Championships under 14 in 2009 where she reached the quarter finals. Unfortunately she couldn’t compete in the under 16 category in early 2011 because of her operation and rehabilitation of her broken elbow.

How important is this tournament for you and for Elke?

It is a great honor for Elke to represent her country. Being selected is a great reward for all her hard work and good results of last year. I think it is fantastic for her to be among such an international group of people who are all the best players of their countries. I am sure it will be a great experience with hopefully a fantastic result.

As a coach, what are the most important things you try to achieve with Elke?

Elke is a very intelligent girl with huge fighting spirit and a professional attitude. She is at her best when she feels that she has her business in order, so she takes care of that. I advise her on preparing effectively, setting priorities and how she can do things even better of more efficient. We talk a lot about the work-rest ratio, the influence of exercise on the body and food intake planning.

In training we focus on all aspects of the game to get better results. We train technical and physical, but there is especially room for improvement tactically and mentally, which is good news. Right now we focus on the offensive game because her defence and counter is already up to par.

How did Elke prepare for this tournament?

Elke is in her last year of high school. Sinds the start of the summer season she had to focus more on school than on tennis. The final exams are a big deal and combining that with tennis does create additional stress in the body. Fortunately for her, she did well on her exams which means that she can now focus on playing tennis again. Immediately after her exams, she started playing Futures. The experience and the data we collect from playing these matches are used to constantly improve her game. We also work with KNLTB coaches Manon Bollegraf, Jan Siemerink and Raymond Knaap. Every week she trains at the national training centre in Almere.

Are things different mentally when you represent your country?

I think this is different for every player. I remember that when Raemon Sluiter played for the Netherlands during the Davis Cup, it was a really emotional time for him. For other players it could just be another game. I am not expecting the audience to be dressed in full orange in Klosters, but nevertheless I hope that Elke Tiel and Roos van der Zwaan can give themselves the power they need.

Elke is looking forward to it and so am I.

You can still support Elke with her crowd funding mission to finance her travels. Visit http://bit.ly/12xkBe5