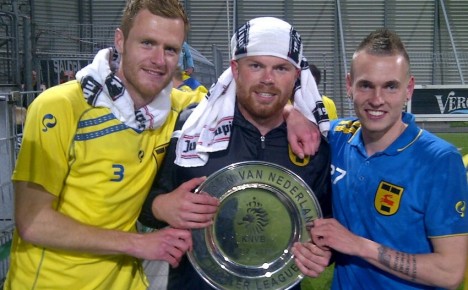 Sport is beautiful. Every year at the end of the football season emotions run high at every level and stadiums explode when teams become champion, gain a ticket for European football or get promoted.

This year SC Cambuur Leeuwarden became champion of the Jupiler League (second league). The club won the Jupiler League after a thrilling last match day coming from second place and beating Excelsior in Rotterdam, while their competitor Volendam lost to Go Ahead Eagles at the same time. After this, Volendam and Go Ahead Eagles were condemned to play-offs together with amongst others Roda JC and VVV, the numbers 16 and 17 of the Eredivisie. Willem II relegated straight as number last of the Eredivisie.

The finals of the play-offs for the last two tickets to the Eredivisie next season, went on between (again) Volendam and Go Ahead Eagles and Roda JC and Sparta Rotterdam. Roda JC regained the Eredivisie status after a ‘thriller win’  in the second home match (2-1 after 0-0 in the away match) with the winning goal from Mark Fledderus  in the very last minute. Can you imagine how the stadium exploded in Kerkrade…..

Go Ahead Eagles beat Volendam again (3-0 at home and 0-1 away).  CiC group players Leonard Nienhuis, Leon Broekhof and Tim Keurntjes (Cambuur) and Jop van der Linden (Go Ahead Eagles) and Mitch Paulissen (Roda JC) were ecstatic after (re)gaining a place in the Eredivisie next year. ‘A dream comes true for me’, both Jop van der Linden and Leonard Nienhuis said. They are going to play Eredivisie for the first time next year. Leon Broekhof (former Roda JC) and Tim Keurntjes (on loan from FC Groningen) and Mitch Paulissen (just made his breakthrough at Roda JC) played Eredivisie before, but were just as happy. The party went on for three days in Leeuwarden, Deventer and Kerkrade….

Look at the pictures in the gallery to understand the feeling. At the article picture you can see Leon Broekhof (left), Leonard Nienhuis(centre) and Tim Keurntjes (right) straight after becoming champion. The first picture on top shows Jop van der Linden’s girlfriend with the Go Ahead Eagles Eredivisie shawl. The second the outrageous fans of SC Cambuur during the last match. In the third picture you can see Jop van der Linden taking a free kick during the last match. Picture four is also taken during the last match Go Ahead Eagles against Volendam, when it was very close still. CiC agent Harold Siekmann, Ruud van der Linden and family are intensely watching. Picture five shows the team of Go Ahead eagles at the podium and picture six shows Jop and his father Ruud straight after the last win. The last pictures complete the feeling with the family of Jop van der Linden of the Eagles just before leaving the stadium.