Virgil van Dijk on a roll in Glasgow 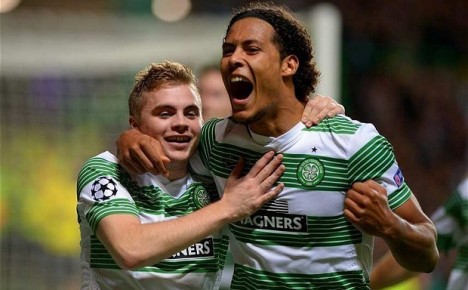 We’re half a year past his dream transfer, and we can safely say that life is good for Virgil van Dijk. After some initial struggles because of injuries, the 22-year old centre back has found his place in the heart of the Celtic defense, becoming one the most important players this season.

„Yeah, life is good, I’m playing well, so I can’t complain”, is what the talented defender had to say about his current situation. We can’t argue with that. Playing for the Bhoys, the Dutchman appeared in 19 matches so far, almost always playing the full 90 minutes in front of 60.000 supporters. And more importantly, he officially made his debut in the Champions League, the highest level of club football. Putting in great performances against world class opponents such as Barcelona and AC Milan.

Celtic manager Neil Lennon couldn’t be happier about his purchase: ”Virgil has been one most consistent players this season. He’s a magnificent player, an absolute bargain”. A feeling the Scottish fans all seem to share. Van Dijk already made it impossible for himself to walk around in Glasgow unhooded, as fans will instantly stop him for pictures and autographs. We at the Quan are incredibly proud of Virgil, and hope he continues his successes. And who knows, maybe 2014 has even more surprises in store for the youngster with media reporting about interest from Premier League top clubs Arsenal and Manchester City and some interest from other countries with major competitions.

As a little dessert, we will give you a piece of brilliance by the defender: