UEFA.com puts Lucas Woudenberg on their ‘Ten Under-19 talents to watch’ list 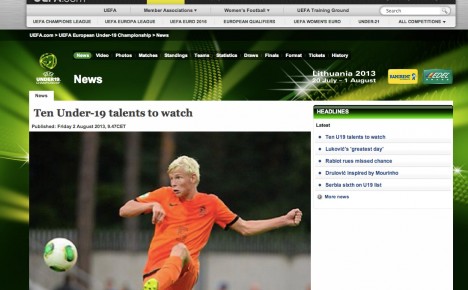 The group of UEFA.com reporters who closely watched the players at UEFA European Championships Under-19 2013 put together a list of ten players to keep an eye on. One of those players just happens to be ‘the vigorous’ Lucas Woudenberg. This is what they had to say about the young Feijenoord defender: “An attacking full-back who covered plenty of ground during his nation’s group campaign. The left-sided defender boasts strength and pace – now prerequisites for a player in his position – while he displayed a keen ability to track opposing wingers and put in expertly timed tackles.”

As soon as we saw the list, we gave him a call.

How did you find out you were on the list?

I was just closing some apps on my iPad when I saw the news item on the UEFA website. I decided to check it out and saw my name on the list. That was pretty cool.

Why do you think they put you on the list?

It helps that I got selected to play for the Dutch team, so they had a chance to see me perform. I don’t know, all I can say is that I always give my all. I think they noticed the way I fulfill my role as a modern attacking full-back. People like to see players work hard and play beyond their position.

What do you do to keep going to the top?

I work hard every day and take this rare opportunity to live my dream very seriously. I love my job and I am very grateful to play with such talented people at Feijenoord. It is the kind of environment where I can keep pushing myself to grow and perform to the best of my abilities. When I do something, I like to do it well, or not at all.

So there you have it. Keep an eye out for this guy.