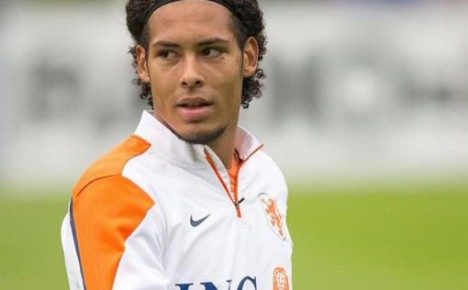 And then the day came…Virgil van Dijk was called up for the Dutch national football team (Oranje) for the first time by brand new national coach Guus Hiddink on the 1st of September. Of course very good news for the young defender of Celtic, but what to do when your girlfriend is about to give birth to your first child? Can there be a bigger dilemma?

But neither Virgil or his girlfriend Rike got stressed and together they solved the tough  situation. They spoke to each other, the national coach and to the doctor in Glasgow and decided to let the baby come straight away (which is a procedure that happens actually more often in the UK than in Holland), instead of waiting for a natural course.

Everything went fine and Rike gave birth to a perfectly healthy daughter with the lovely name Nila on Tuesday morning and Virgil took a plane to Holland to join the national team in Noordwijk a day later than the other players, of course with permission of the national coach.

So Virgil van Dijk is now part of the national team for the games against Italy (friendly) and Czech Republic (European qualifier). We wish him good luck during his first national team week.